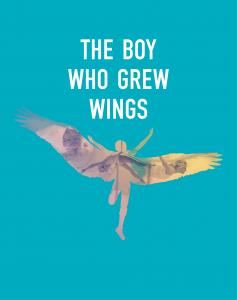 An audience of over seventy were taken on an adventure through Grinlow Woods, which was a feat in itself! Luckily it was dry. However, the storyteller gave us some excellent and very funny health and safety warnings at the outset.

Louise Mellor was a supremely gifted storyteller. Her natural way with children ensured they were captivated throughout. She had a fantastic voice for the setting and her stylised gestures added to the fairy tale feel the piece had.

This was a beautifully gentle story with a simple message; to take time, look up and really see things around you.

The story followed the characters through the woods where we would stop and watch the breathtakingly skilled aerial acrobatics. The strength and sheer bravery of Nina Bambrey as Aquila and Justine Squire as Paloma as they danced high in the trees with only material or a rope between them and the forest floor, really was a joy to behold. Keanu McDonald made a powerful Kinara with his powerful yet achingly tender dancing, showing off the strength and grace of his female counterparts.

Ailsa Mairhughes created the mood for the piece with her musical accompaniment, always highlighting, never detracting from the action. The music had a mystical, almost otherworldly feel to it.

It was the perfect blend of story, movement and music in a glorious setting. It’s just a shame they only performed for one day. A totally magical and unforgettable hour spent in the woods.

What a great addition to the Fringe itself, for Opera North to bring its Youth Chorus to Buxton with this massive show – 28 young singers on the stage, 14 young musicians in the orchestra – all piled into the Pavilion Arts Centre.

This new piece, a modern adaptation of Hilaire Belloc’s famous Cautionary Tales, centres on motivational speaker Dr Ferret (Whittaker Mills, the only adult in the company) offering a cure for various symptoms of childish bad behaviour, as exhibited in the well-known rhymes.

Composer Stephen Deazeley has fashioned a piece which is musically taxing (singers and orchestra all were worked hard) but also instantly accessible, and director Matthew Eberhardt somehow manages to squeeze this huge company onto the Arts Centre stage, keeping them moving and flowing with well choreographed movement. Occasionally with such large numbers singing, diction could be unclear, but this was perhaps down to the vagaries of the venue as much as the performers.

This was a very ambitious show, and great to see such large numbers of talented young people mobilised in such a fashion. 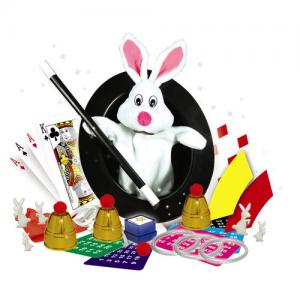 High Peak Magic Society’s evening of close-up magic is a Fringe regular and the audience consisted of people who had since the show before and wanted to come back for more (There were people on our table who had been eight times) and newbies seeking an entertaining night out. And it certainly is an entertaining night out! Your party will be allocated to a table where, depending on the size of your group, you will be seated with other people to fill up a table of ten.

The concept is simple; magicians rotate between the tables, so over the course of the evening you are treated to ten minutes of close-up magic by each of the eight table magicians. In between the compere entertains with a little magic and a few gags. The second half begins and ends with some stage magic. Generally I found the close-up magic more impressive than the stage acts. And I admit I was a little disappointed with the very last ‘trick,’ a piece of ventriloquism in the style of Nina Conti which for me wasn’t really about magic. The old fashioned, sexist and sexualised introduction of a female magician at the very beginning was unnecessary, and not the way to encourage more girls and women into the industry and group. It was good to see a range of magicians covering a spectrum of ages.

The evening featured a range of different magic, revolving primarily around cards, ropes, rings, mind-reading, disappearing and reappearing money and jewellery. And a goldfish. Yes, a real, live goldfish!

Magic’s great; Oh I know it’s a combination of trick, deception, clever guessing, disguise and sleight of hand, but it’s clever, takes skill and, I imagine, a lot of practice. You also realise that the patter, the chat and persona is a huge part of the selling of a trick. Children and adults on our table were equally bemused, impressed and entertained.

All of the performers made an effort to include everyone at the table, but took various approaches, keeping it fresh. There is an element of repetition in the tricks, but because they are dressed up in different ways, it doesn’t feel like repetition – and you still couldn’t see how it was done!

Highly recommend as an evening out.

The audience's enjoyment of a Gilbert and Sullivan production is greatly enhanced when the performers are having fun performing the songs. The actors in Princess IDA are eleven young people aged 15 to 25 who clearly love G & S . According to the Director Pamela Leighton-Bilik , despite their tender ages, some of the actors have been performing G & S on stage for ten years or more and this explains their polished performances and how much they relish the humour in the characters and situations.

This particular performance started with the first act of Princess IDA and finished with a medley of G & S finales from Pirates of Penzance, Ruddigore, HMS Pinafore, The Mikado, Iolanthe and Patience. All the actors are have fine voices and are confident enough with the material to introduce topical jokes into the performance in keeping with the spirit of the original story. There was even a very funny ad lib prompted by the noises coming from outside the Rotunda. It is a joy to watch the actors bringing the energy of youth to the catchy tunes and comic brilliance of G & S. As well as some hilarious comic performances , I particularly enjoyed the synchronised movements of the cast that added an extra layer of wit to the production.

This is just a taster for some full performances by this group over the next two weeks. They will be performing all three acts of Princess IDA on three dates and locations. The Medway Centre Bakewell on Friday 28th July, Chapel-En-Le-Frith Town Hall on Saturday 29th July, The Art Theatre New Mills on Sunday 30th July. They are also performing the Patience on Saturday 5th August at the Art Theatre New Mills. All performances are at 7.15pm.

This choir of around 35 primary school children, consisting mainly of Key Stage two pupils, should, in my opinion, be on the TV show, “Britain’s Got Talent”. Not only did they brave the blustery gusts of cool wind on Buxton Opera House forecourt, they removed their jackets, in order to form an obvious team in their school uniform of blue tee shirts and grey skirts or trousers,

The children were initially brought into line by Mrs Littehailes, the school headmistress, then their musical director, Emma Hillier, who has been a teacher at the school for over twenty four years, took over. She is currently in charge of the reception class, known as the “Kestrels”.

The paper music was blown around by the gusty wind and the children were obviously excited as this was not only their first performance in a Buxton Fringe Festival, but also the penultimate day of the school year as they broke up for the summer holidays on the next day.

Despite all this, the choir was well regimented and in amazingly good voice, and sang enthusiastically to the accompaniment of Ed Simpson, who used his initiative to batten down his sheet music to the keyboard stand with clothes pegs.

After some warm-up body and vocal exercises, the show began. The idea was for members of the audience to pick a number from their human bucket/ juke-box, which corresponded to the title of a song, an idea that worked well.

The children were word-perfect and the ten songs in their repertoire ranged from Jungle Book’s “Bear Necessities”, through to “He has high hopes” and “Day by Day” Their obvious favourite was “At the bottom of the Sea”, which was sung in three-part harmony and was again, word perfect. I belong to a senior citizens’ choir and I doubt that we could perform such songs so fluently and harmoniously!

Another wonderful surprise! Two of the older boys, Arthur and Sam performed solo introductions for two of the songs. As Mrs Hillier proudly pointed out: “This proves that boys do sing!”

Thank you St. Luke’s singers for such a professional performance. Gareth Malone, the choirmaster and talent finder for many TV shows would be proud of you. As William Shakespeare wrote, “If music be the food of love, play on”, and we, the audience say “Carry on the brilliant, harmonious work. You are delightful”. 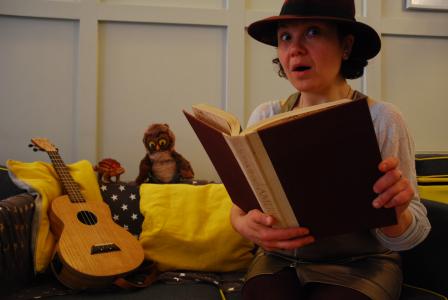 Gill told stories about children who have behaved badly and as a result have a sticky end. Gill told the stories through the medium of song. She accompanied her singing by playing her tenor ukulele. All the songs except one were composed by her.

The children were presented with an array of objects each one having a moral tale related to it. Each child in turn chose one of these. These cautionary tales subject matter involved children being obsessed by computer games, being too fond of ice cream, refusing to go to bed, being rude and snatching other people’s possessions. An excellent example is of a child rudely pulling funny faces having to retain that face for ever.

My favourite was the story of Alf who took on the activities of a highwayman by relentlessly snatching other children’s toys such as juggling balls. It was a grandma who was taking a teddy bear to her grandson who managed to persuade him not to take the teddy bear and she makes Alf realize that he needed to amend his ways. The reformed Alf gives back the toys he has stoles and shows kindness to his victims.

Gill demonstrated good expressive singing with effective chordal playing on the ukulele. Her compositions were effective. I particularly liked the Italian style in the Ice Cream Song. She increased the expression by changes in the tone of her voice and changes of tempo.

The audience participated well and even though some children were pre – school they remained focussed and seem to empathise with the characters predicament.

The Brave Bold Drama is based in Bristol.