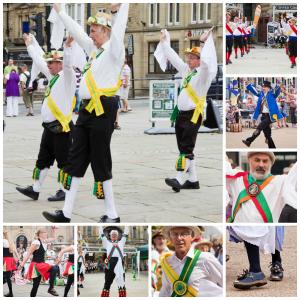 This event is a well-established and much-loved part of the Buxton calendar and because it happens all over the town it is enjoyed by many people who see little else in the Fringe programme. It would be easy to take something so familiar for granted and suppose that it is the “same old, same old.”

That would be wrong. The world of English folk dance has debated and reviewed its attitude to “blacking up” over the past year. Some Border Morris dancers, especially, have added to the theatricality of their performance by wearing black stage makeup on their face and hands. This was, it is said, an acknowledgment of the times when the rural poor sought to avoid being seen when poaching at night. Others have argued that in a 21st century Britain this “blacking up” is inappropriate and open to misinterpretation.

Powder Kegs, from Whaley Bridge, are a local Border Morris side that has, in the past, “blacked up”. They continue to paint their faces but now use some of the flame colours of their rags. Domesday Morris have adopted a smudging approach whereas Stone the Crows seem to continue to black up in the traditional manner. It will be interesting to see how this develops over the next few years. As one dancer told me, “We do this for fun, we don't want controversy.”

Also new for this years Day of Dance was the visit of a team from Cyprus, guests of the Manchester Morris Men. Morris dancing is hot enough work for an English summer - quite what it is like under the Cypriot sun hardly bears thinking about. Today in Buxton was pleasantly warm and 16 Morris sides provided a splash of colour and, for some visitors to the town, novelty.

LETTERS IN THE RAIN... - Paulette Mae 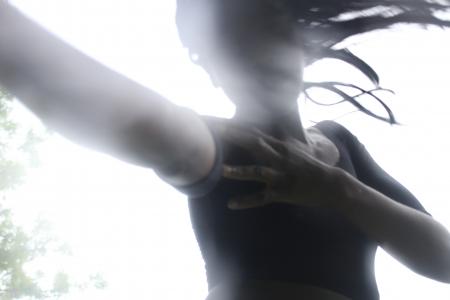 Letters in the Rain is an engaging performance with a hypnotic quality. Paulette Mae herself is a confident performer with a welcoming personality.

Paulette used the space at The Green Man Gallery in such an interesting way; she always worked in harmony with the room. She used an open door to throw a pool of light onto her cascading waterfall. Then at other times used blinds at different levels in order to light portions of the space. The set itself gave a sense of water and reflection.

Her movement had a huge sense of control to it. Things were precise, they built, and there was a sense of perpetual motion in the piece. Her voice had a mesmorising quality, whether she sang words or sounds it always drew the listener into her world. There was almost a playful element to the sound as she sang higher and higher. When the brochure write up said low-fi I hadn’t expected the soundscape of the entire piece to be played on a tape recorder, the sound ebbed, deliberately, as the show moved forward.

The ending of the piece was very clever and really uplifting. I can’t honestly say I understood everything, but I had my own ideas of what could be happening and it made me think.

Go and see this piece if you want to see a really unique multi-art performance.

The venue will seat a maximum of 12 so ensure you turn up early to avoid disappointment. After the show, pop upstairs and see the wonderful Wetness and Wild exhibition. 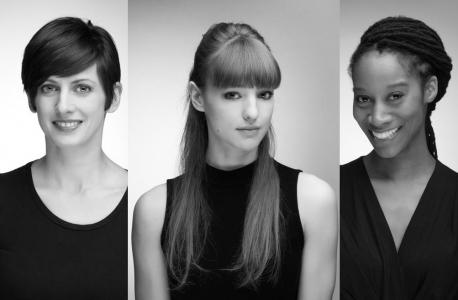 This was the world premiere of a work that in part had its origins in the Buxton Festival Fringe - so I approached in hope but also with some anxiety. Could this be the event that anyone close to the International Festival and the Fringe wanted it to be?

In 2014 dotdotdot dance brought their flamenco show No Frills to the Fringe. It was electrifying. They also did spontaneous workshops in the Pavilion Gardens and Festival opera soprano Gillian Keith saw this and joined in. Gillian, like everyone one else, was bowled over.

Tom Randle had written a song cycle using five poems by Pablo Neruda for Gillian and pianist John Reid. When it became apparent that there were dance elements in the piece it was decided to invite dotdotdot to become involved and expand the piece. There are now seven poems and interludes for dance.

Los Nacimientos is presented as a continuous 60-minute piece. The three dancers begin by coming onto the darkened stage and exploring the piano while whispering in Spanish. As the cycle develops pianist John Reid and Gillian Keith too become involved in the choreography. The playing and singing are, of course, excellent - both are obviously fully-committed to the work. The poems - even in translation - are elusive. They have something to do with beginnings, natural cycles, the moon and the elements.

The dance sequences are explosive and intense and it is impossible to watch the feet, hands and eyes of the dancers - there is so much to try and take in.

Not everyone will “get” the piece. For some the ambiguity of the narrative will be frustrating; others will want more (or less) dance (or singing). I can only suggest that you see and hear it, be open minded and relish it for the thing of beauty that it is. Treats like this come our way but rarely.

There is one more performance in Buxton and no further performances are presently scheduled - though all involved are keen to take Los Nacimientos to the wider audiences that it deserves.

A NIGHT IN HAVANA - Wallflower Dance 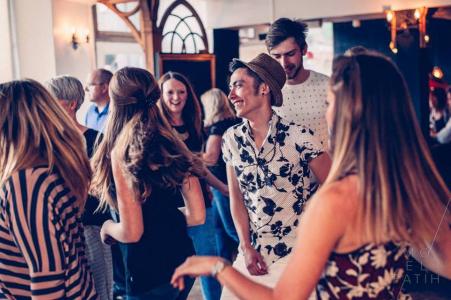 Passionate professional dancer, choreographer and teacher Victoria Coultas holds regular salsa classes in Buxton and Leeds but A Night in Havana was her first foray into the Buxton Fringe.

Under romantic strings of fairy lights and jumbo paper flowers, a large crowd of dancers, including some complete beginners, made the most of the party atmosphere at South 16, joining in her 8pm salsa class followed by an easy introduction to cha-cha. Victoria kept things deliberately basic and was wonderfully enthusiastic and supportive, inviting each set of partners to high-five each other before one member passed down the line, ensuring that everybody danced with everybody. Her teaching method is such that everything is built up incrementally with the result that dancers quickly find themselves confident in a mini routine that feels great to practise to the music.

In the second half, beginners and more experienced dancers alike were invited to strut their stuff to some great live music from guitar, vocals and drum duo Easy Feet. Of course this also made for an enjoyable spectacle as we saw the dancers twisting and turning to the infectious Latin music.

The restaurant was packed but for those organised enough to book a table in advance there were some tasty-looking tapas on offer, from fried king prawns, to chicken on skewers and tortilla. The best news is that even if you missed all this, every Thursday night you can enjoy the menu and take part in Wallflower’s beginners’, improvers’ and intermediates’ classes at South 16. See www.wallflowerdance.com for details.