Learn how you can get involved in the community as a performer. 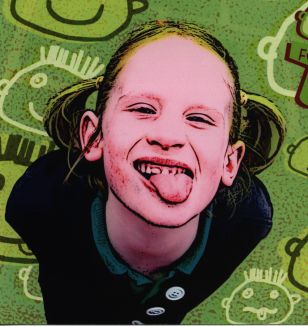 In recent years we have placed a special emphasis on working with the community offering performers the chance to bring their talents to local schools as well as elderly people's care homes, a housing trust and youth organisations.

Our aim is to provide enrichment for local community groups and also to provide a chance for entrants to earn some extra money while they are in the area.

The work with these groups could involve anything from a full or cut down performance to organising workshops.

After confirming their booking, entrants who have registered their interest with Community Links will receive a link to a list of contact names and postal address of the participating groups, allowing artists to contact them in their own time and in their own way. At the request of some performers, the list now includes details about the workshops/performances these groups would ideally like to see, plus budgetary restrictions and tips on the best way to make contact.

The task of the Fringe organisers will be solely to provide this contact information. All arrangements including funding and contracts will be agreed between the entrants and the group managers / leaders.

As an entrant, if you are interested in making a connection with a group during the Fringe please indicate your interest and let us know what you would like to do when completing your on-line entry form.

We very much hope that you will want to take advantage of this scheme.

If you have any queries about this scheme, please Send message to Community Links.

We would also very much welcome your feedback in order to improve the scheme for the future and celebrate successful collaborations on our website.

Community Links is part of our wider commitment to the community as evidenced in children's workshops, ongoing links with the Buxton Community School, our participation in the Buxton Carnival and many other initiatives.

Here is a comment from one of the many performers who took advantage of our Community Links scheme in 2018: Debbie Cannon who performed Green Knight at the Fringe organised a workshop with pupils of Peak Dale School. She says: "I did some work with [the children of Peak Dale School] on the story of King Arthur - we acted out some bits with the children playing Arthur, knights, lords and ladies, dragons, Merlin and lots more! They were brilliant - so enthusiastic and imaginative! Thank you for suggesting the community links - I'm so glad I did it!"

A Case History from 2019 - with thanks to musician Paul Cromford 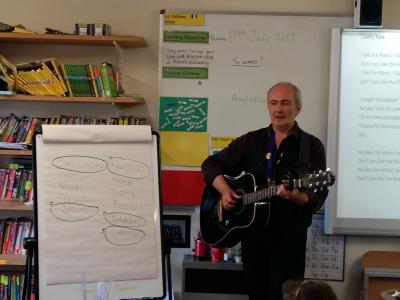 Fringe40 performer Paul Cromford became a semi-regular visitor to Fairfield Endowed Junior School in June and July 2019, as part of Buxton Fringe’s Community Links programme --- and he says the experience has affected him deeply.

"I was keen to get involved in the Community Links programme this time around," says Paul, a Buxton-based musician and composer whose previous Fringe participation was back in 2013. “The idea of working with a local junior school was mooted, and to be honest I was a bit reluctant to agree. Why? Well, I've never considered myself 'good with children', as the saying goes; always very shy and awkward."

"My wife Carole and I had a preliminary chat with FEJS deputy head Sue Parkes," he explains. "We arranged for me to visit Year 5 on four consecutive Thursday afternoons. I took a guitar along, and each week I led two classrooms of children in songs and discussions themed around the Moon." Why the Moon? The choice of subject-matter was suggested by his lunar-related show, 'The Ancient Pull', which he wrote specially for Buxton Fringe40 and which received a nomination for New Writing in the Fringe Awards. "As it turned out, I needn't have worried," says Paul. "The children were charming and inquisitive, keen to enter into the spirit of our activities, and the school couldn't have made us more welcome if they'd rolled out a red runner!"

Each week Paul spoke about some aspect of the Moon, opened up a discussion with plenty of free-ranging Q&A, then played a song from his show to illustrate what had been discussed. "I got really into planning for each visit," he says. "For example, Week Two's theme was the daydreamers through history and their fantastical ways of reaching the Moon; as part of this we demonstrated the true distance between Earth and Moon in the classrooms, with our own scale-models: a grapefruit, a ping-pong ball and a tape-measure (the answer's 105 inches, if you're interested!). Then for Week Three, discussing the Apollo astronauts who got a chance to see the hidden far side of the Moon, I asked one class to swivel their chairs around and face the 'back' of the room, where I was standing to address them; it was an exercise in seeing things from a fresh viewpoint."

What Paul didn’t expect was that he would get just as much out of the sessions as the children. "Some of their off-the-wall questions and comments really forced me to think very carefully about my replies; we don't realise how lazy our thinking is, most of the time. And of course, it was such a thrill for me to find myself actually conversing with children as naturally as I would with you! That's changed me forever."

Would he do more work in similar vein? "Oh yes, at the drop of a hat. My wife and I are hoping to arrange a return visit to Fairfield Endowed during their autumn term, maybe to stage my Fringe40 show for them.... after all, they already know four of the songs! I'm so glad I took the opportunity presented by Community Links; it's enriched all of us that were involved, and I will carry with me some great memory-highlights, such as seeing a classroom of children 'strumming' their plastic rulers and singing along while I played them a tune. Marvellous!" 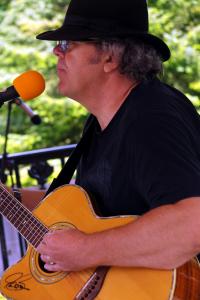 "I wasn't sure exactly what I was going to offer", says Peter about his decision to register an interest in Community Links , "but something along the lines of a guitar workshop, or perhaps a performance to youngsters or the elderly who may not necessarily have access to live music".

Explains Peter: "We had an initial meeting where we prepared together an itinerary for a one-hour music session to be held after a weekday tea. The date arrived and about 20 people filled the very comfortable lounge, making an eager audience."

What resulted was a really good gig with a special atmosphere of music and fun. Always in performance, Peter looks to engage the audience and this was no exception - the level of participation and pleasure was tangible throughout. The icing on the cake however was when one fan rose to her feet and proceeded to bop away to the music. This was infectious and pretty soon spread, until staff and residents alike were slaves to the beat!

The surprising thing was (notwithstanding the generous average age) that after the session, Peter was told that this particular lady had never in all her time there, so much as left her seat.

This was a truly heart-warming and positive addition to the "Fringe effect". Peter adds: "I'm glad to be able to recount this, hoping that it will encourage further Tales from the Fringeface in 2016."