It was great to see Underground returning to film as part of their programme, with this excellent quartet of short films from Brother-Brother productions (Yaz and Haz Al-Shaater).

The programme offers much variety. It begins with a comedy ‘None of the Above’, displaying Tom Crawshaw’s absurdist humour, in which a learner driver takes his multiple-choice test, only for it to turn into a ‘Choose your own Adventure’-style fighting fantasy scenario. In ‘Ruth’ (written by Mariam Bell and dedicated to those we have lost), a man (Michael Grady-Hall) wordlessly packs up the last belongings of a life, tearfully observed by a woman (Ashlea Kaye). In ‘Silent Night’, we are thrown into the heart of the action as a man in a Santa suit is stabbed by a homeowner (Kudzanayi Chiwawa) in what appears to be a Festive home invasion, but could be more of a Robin-Hood style redistribution of seasonal cheer. Finally in ‘An Admin Worker at the End of the World’, Ashlea Kaye returns as a woman facing up to devastating environmental disaster, set against the humdrum routine of office life. As in ‘Ruth’, the camera dwells on Kaye’s sad, expressive face, drawing much from her highly sympathetic performance.

This is a rewarding array of films – all witty, visually stylish and thought-provoking, and all well worth checking out. As so often with short films, they are the calling cards to bigger works, and on the evidence of these, the Al-Shaater Brothers have a great future in this medium. 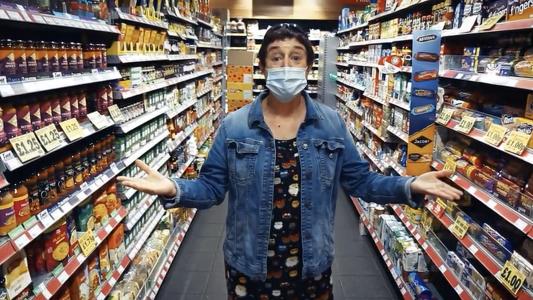 Naomi Paul made her Buxton Fringe debut in 2019 with her enticing comedy show, Despite Everything, Price Still Includes Biscuits. This year she is back with something very different, a heartfelt community film, laced with humour, that perfectly captures the strange experience of that first lockdown in early summer 2020.

The film came about after the not-for-profit arts organisation Live & Local launched its LivingRoom project in response to the pandemic. The village of Meon Vale, near Stratford-Upon-Avon, was paired with spoken world artist Naomi Paul to create something that celebrated this new community’s sense of place, its history and the importance of its natural environment during lockdown.

We don’t actually see the residents but we hear ghostly echoes of their voices at times with Paul taking centre stage as she becomes the main channel for their words, music and poetry. We are reminded of “skies dark with stars”, “running on empty roads”, “walking the dog to clear the mind” and of how it felt like “a time to reset”. There was the surreal, socially-distanced VE Day event and all that extraordinary sunshine, but there was also, of course, tragedy and the need to feel lucky even when it was just “feeling lucky that the NHS was there for my nan when we couldn’t be”.

In a lighter section, Paul offers a quirky ode to the village shop. “Londis is a treasure trove”, she says and it turns out she’s not joking - they even had toilet rolls.

Throughout much of the film there is beautifully shot footage of the local woodland and all the birds, insects and animals that live there. At one point we even get a dog’s eye view of the forest floor. Listen on headphones for the full immersive effect as an evocative soundtrack features the distinctive chiff chaff and other birds.

Paul explains that the village is on a former army site but that there are “still manoeuvres and battles to fight”, namely the campaign to save the local woods from development. The film concludes with Paul’s jazzy, jaunty but also deadly serious song called The Promise of the Woods, a call to arms as well as a tribute to the rejuvenating powers of the forest (happily in December last year, the community learnt that the plans for its development had been withdrawn).

The villagers’ ancestors planted those trees and for all the dangers of Covid, the film expresses the residents’ quiet confidence that Meon Vale with its newly built houses near the woods is “a place to feel safe - we’ll all be here a long time”.