The children of St Luke’s Primary School in Glossop returned for a second successful year at the Fringe and could clearly adopt the tagline ‘Glossop’s Got Talent’. Unlike last year, the weather presented more of a challenge in terms of sunshine outside the Opera House, but again they were not deterred.

The choir were led by their musical director, Mrs Emma Hillier, who is, I suspect, something of a legend at the school and is a reception class teacher for ‘Kestrels’. They’d obviously worked hard on their show, and like that other Fringe favourite The Shakespeare Jukebox, the audience were in charge of selections, so they really had to know their stuff!

Everybody in the choir seemed to enjoy themselves and the audience clearly enjoyed the show too. The headteacher, Mrs Littehailes, the school and of course the parents should all be proud of the children, and perhaps some of the may be back next year?

So, a big Thank You St. Luke’s, well done again, and we’ll see you next year!

FRINGE ON THE MARKET! - Fit Up Productions 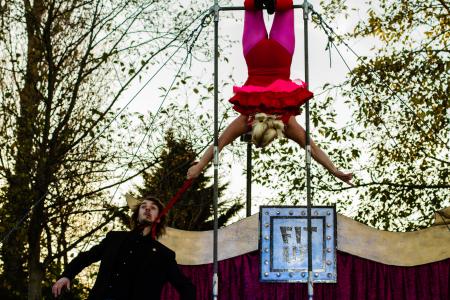 What a fab idea, bring the Fringe to the Market, and not just one show but quite a few tasters of other shows too! The whole thing kicked off at 10.00 in the morning and was planned to finish at 3.00 in the afternoon, but then events on another stage meant that the curtain was lowered a little early but not before a day of fun was had.

When I visited the show was in full swing, entertaining a good mix of people of all ages. Of course, with this being a street show, audience participation was a given, and so it proved to be as four, shall we say stout, gentlemen of Buxton were roped in to the act, providing support for something that was part trapeze/acrobatic/juggling. When I say support, I mean that literally as they were responsible for holding up the frame on which Natasha balanced on! Bravo gents, the audience really appreciated your efforts! We also got a glimpse of Jim of Jane & Jim Poetry Theatre who’ll be appearing at the Green Man Gallery later in the Fringe for just £3 a ticket!

The show was full of energy and kept the audience engaged, especially four of them, and Natasha and Corey clearly enjoy what they do. Bravo to you two too! My only quibble is that a nearby bar kept their music turned up which was distracting to say the least. Perhaps next year . . . it would be nice to have you back. 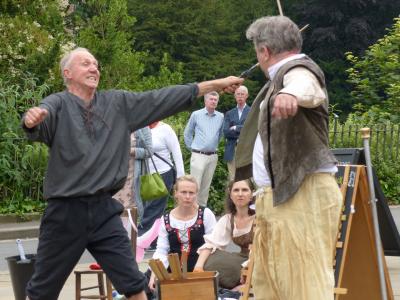 Those Fringe perennials the Buxton Drama League charmed us once again with their Shakespeare Jukebox. The conceit is a simple one – there’s a list of scenes from some of the Bard finest works, and members of the audience can pick which ones get to be re-enacted in front of them. Simple!

The cast and characters change each year, but each year this remains one of the most popular events on the Fringe calendar, and it’s easy to see why. The material is presented in an accessible, easing-going style, with a good side-helping of humour. Last night this was personified by Barrie Goodwin who performed with gusto and the audience responded to some great scene stealing action! I even heard tell that one member of the audience thought it would be the best Shakespeare to be seen at this year’s Fringe...

There are more chances to see some of Buxton’s finest in action on the Opera House forecourt at 6, and if you like what you see Buxton Drama League also have a play staged at the Pump Room tonight at 7.00pm.

On a more serious note - this is a free event but the League invite donations which currently go to the Buxton Samaritans and they thank audience members who donate money in exchange for a performance.