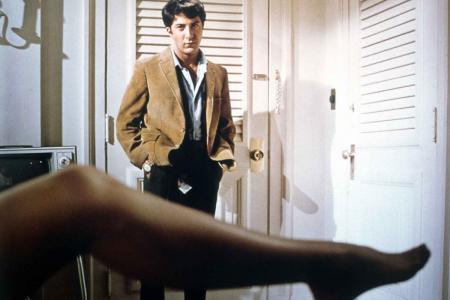 “Hello darkness my old friend…” There is nothing like the experience of watching a film in a cinema - or at least something approaching a cinema - so it is good to see Buxton Film at the Fringe again this year.

Released 50 years ago and joyously scored with the music of Simon & Garfunkel, The Graduate was a fine choice for a hot July night with the audience at Buxton Working Men’s Club drinking in the sun-drenched Los Angeles vistas and beautifully shot swimming pool scenes. It is always a danger revisiting a classic movie but this one certainly stood the test of time with its deadpan humour, accurate depiction of suburban mores and sheer visual panache. Director Mike Nichols continually surprised with his inventive shots. The jerky unveiling of predatory Mrs Robinson (Anne Bancroft) was particularly well-handled with the viewer seeing everything from Ben’s point of view as he repeatedly looked, looked away and then looked again despite himself.

Times move on and with Hoffman himself accused of sexual harassment it felt slightly odd to be seeing him again in the role of an innocent though of course Ben’s behaviour as he pursues Mrs Robinson’s daughter Elaine (Katharine Ross) becomes increasingly unattractive. The film’s superficially romcom-esque ending is fascinatingly ambiguous. I don’t think I ever noticed first time round but the expressions playing on Katharine Ross’s face are intriguing.

Just about everyone in the audience had seen the film before which is a shame in a way as I think it would also have spoken today’s new graduates as they enter that frightening limbo period where everything seems possible and at the same time nothing seems possible. “One word: plastics!” is the sort of time-honoured, middle-aged careers advice Ben has to contend with as his parents’ generation crowd in on him incessantly, refusing to let him “drift” in the pool and through life.

The evening came about as a result of Buxton Film’s excellent new pop-up kit and they are thinking of repeating the initiative in Buxton Working Men’s Club as well as in surrounding villages. Buxton Film will also return to the Pavilion Arts Centre with more great films in August. For all their latest news visit www.buxtonfilm.org.uk