The Roses of Eyam Project has become such a talked about phenomenon that people have had to fight to get a ticket so I felt privileged to witness this extraordinary production using the real life location to tell the story of the village that lost a third of its population to the plague.

Clearly this has been a massively ambitious endeavour involving the whole community. Cars had to be moved and people vacated their houses - the original plague cottages - in order to turn Eyam 2009 into Eyam 1665. Many of the residents have been involved in the play with the result that real life Eyam couples and siblings play family groups from the past. Indeed one villager, Joan Plant, plays her ancestor Margaret Blackwell, a survivor of the plague.

Walking up at 7pm, we the audience became villagers ourselves witnessing the fateful arrival of a horse and trap laden with material from London. 'There's nowt but the latest fashions in that box', we were told, but of course before long it became apparent that the damp fabric was alive with deadly plague virus and we were all outside the house where the first plague victim died.

In times of crisis, people look to their leaders but stern new rector William Mompesson (a well cast Robbie Carnegie) was viewed as 'full of arrogance and spleen' by the villagers whose allegiances lay still with the former rector, a parliamentarian named Thomas Stanley (Tim Warburton). When it came to making the unpopular but necessary decision to contain the village, Mompesson and Stanley formed an unlikely alliance to persuade residents not to leave and spread the plague.

Throughout this promenade production the audience moved between nearby locations including the churchyard and the old sheep roast. It was easy to see how the original villagers themselves might have moved around in loose packs like this, afraid to meet anywhere but in the open. Indeed the simple fact that we were standing where it all actually happened helped make the experience both moving and engrossing.

Nicola Wright who adapted and directed Don Taylor's sensitive, well-written play, originally sought to stage a professional production but various arts funding was not forthcoming and it became an amateur performance. As such, it had a few rough edges but these only added to the humanity and truth of the show. Carnegie himself proved his mettle particularly in the second half when the cracks in his armour began to show but there were also fine performances from Warburton as Thomas Stanley and from many of the villagers and children. Fran Clifford as Old Sarah Merril particularly stood out, her scenes adding welcome humour to a grim tale.

As we moved about, I heard the odd nervous comment such as: 'Well swine flu's not exactly the plague is it?' and there was no question that being on the brink of a pandemic ourselves added to the chilling atmosphere. In the end though, there was something uplifting about it all too. As Stanley put it when the crisis was finally over and no other cases had been recorded in Derbyshire: 'For once men's acts matched their imagination'. 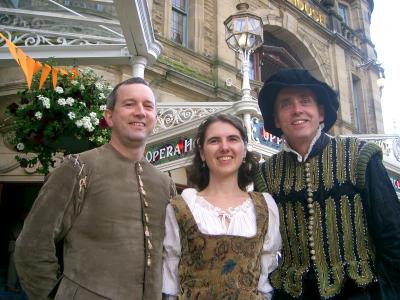 Roll up, roll up! Come catch Buxton's very own Drama League (well at least 3 of them) performing snippets of the Bard's works free of charge (well almost) in a charming and refreshing style!

Never heard of a Shakespeare Jukebox? Well this is how it works. There are a number of scenes from some of the Bard's more famous plays on offer, and with the donation of cash to help support the Buxton Samaritans, the players will bring a scene to life!

Three hardy souls (Alex Archer, Maria Carnegie and Gerard Crawshaw) bring local charm and a degree of spontaneity to a tricky subject - how to bring Shakespeare to the masses, well a modest crowd outside the Opera House anyway. They do this admirably and are just about word perfect. All the players put on a good show and are to be applauded for their efforts. There's even an element of audience participation, so beware!

It's a nice way to catch some of the 'culture' often associated with the Festival which is attached to the Fringe, and its helping a good cause. So turn up on the 18th -21st and 23rd-25th and give generously.