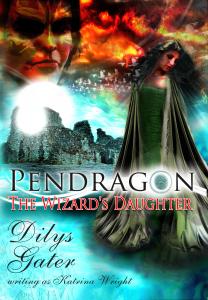 Dilys Gater was born in Wales and grew up in a Welsh-speaking community. She has never lost her love of the 'sighing and soughing of the soft Welsh tongue', nor of the country's history and culture. In her Pendragon novels, she aims to celebrate the Welsh Celtic tradition and capture some of the magic that can still be experienced in Wales.

The Wizard's Daughter and The Hand of Glory tell the story of Nimue who leaves London in 1593 to find her destiny in North Wales, the land of her birth. She discovers it is a land of superstition threatened by sinister forces that only she with her special powers can confront. They are books to appeal to readers of all ages who enjoy tales of wizardry and witchcraft.

Dilys launched a new edition of these novels on the Fringe. They feature covers by the designer Christopher Jones which evoke the mystic stories that are to be found within. The launch was held in Dilys's consulting room in The Grove Hotel where she works as a psychic medium, a place suitably filled with books and other goods suggesting the esoteric mysteries she explores in her novels. We were treated to recorded readings of Dylan Thomas's poems by Richard Burton. The words were English but the musicality was Welsh. The reading from Dilys's work which followed showed how she too aims to capture this quality in her stories.

Dilys Gater's Pendragon novels can be ordered through any bookstore. There are some leaflets at the Fringe Information Desk for those who would like more information about these and the many other books she has written. 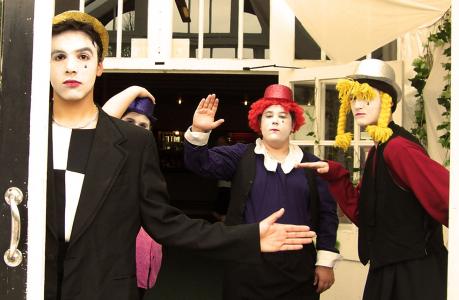 A welcome first for Buxton Fringe, the Fabulous Fund-raising Fair was fun, family friendly, creative, and a little bit silly. Bringing the now reliable energy and good humour of Buxton's home grown thespians and performers to a new challenge and format produced a jolly, and hopefully profitable morning.

It is an unfortunate truth that participation in Buxton Fringe is rarely profitable and can sometimes be costly for the enthusiastic individuals and companies who take part. The three groups who put this little side show together have turned necessity into virtue.

The human fruit machine was particularly clever and the box of many keys strangely compulsive. Tea and cakes in the true British church hall tradition, face painting , games of chance, and a bric-a-brac stall were all doing a fairly brisk trade despite the slightly obscure and poorly signposted venue. The supportive Buxton community turned out and mucked in, but a similar event in future years perhaps needs to try a little harder to attract the less familiar visitors to enjoy and contribute to such a wholesome and worthwhile venture.

Jennie Ainsworth is a Fringe stalwart and has been bringing her guided walk to the festival for longer than I can remember. It was a delight to join her group after a gap of a number of years and refresh my memory of Vera Brittain and her Buxton.

Vera moved to Buxton with her family at the age of 11 in 1905 and lived here for only 10 years till 1915. They were formative years, however, and their impact upon her is most clearly seen in her 'autobiographical study' Testament of Youth. This book caused an unfavourable stir among local people for its depiction of Buxton as a town 'trapped in its isolation' where Vera could find little intellectual stimulation.

Jennie characterises Vera on the positive side as intelligent, idealist and determined but is ready to admit she could come over as also vain, overbearing, intolerant and somewhat humourless. It's nevertheless clear that Jennie has great affection and empathy for her subject. She paints a very clear picture of Vera's frustration with being born into a wealthy family forced to live a constrained life as a young woman with rigid expectations of behaviour and life story. This early experience meant she looked at Buxton through a very dark lens.

Jennie interweaves Vera's biography with the story of familiar Buxton landmarks - the Opera House, the Crescent, the Devonshire Hospital - setting them firmly in the context of early 20th Century history and social mores. The impact of the First World War on the town and on Vera's life is a particular theme. The personal losses that she suffered shaped her views and work for the rest of her life.

Two hours passes very quickly on this tour. It would be difficult to come away without sharing some of Jennie's passion and knowledge. 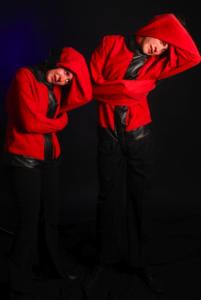 If you like old-fashioned magic this is the show for you.

If you feel nostalgia for the Music Hall and the end-of-the-pier... this is for you.

If you hanker for the circus, the sword-swallowers and fire-eaters... this is for you.

If you miss escapology and juggling and contortionists... then this is the show for you.

Michael Jordan and his sister Siobhan are extraordinarily accomplished, entertaining and witty. They are engaging, not too slick and take their audience with them all the way. You will have a very good time in their company.

To wet your appetite; there is juggling in the dark, juggling on a five foot unicycle (we're in the Pauper's Pit here you know, it isn't theoretically possible), rope tricks, the swallowing of a farting balloon, razorblades, a folding banana - the magic salesman misheard bandana, strait-jackets - this was inspired, duet escapology to "Battling Banjos", obvious really , why hasn't it been done before?, death by umbrella, an imaginary, invisible virtual card trick and much, much more.

And charming us through it all the lovely Jordans. Go along and give them a hand, you'll get it back.