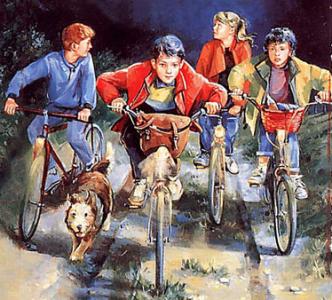 Lashings of ginger beer, anyone? The infamous five paid yet another curious visit to Buxton and, with the notable absence of uncle Quentin, it was once again the same fare. The gangly Dick, Anne the know-all, George with her contorted facial expressions and cricketer Julian, together with various surrogate dogs, were here again to interfere with the everyday lives of the good burghers of Buxton.

This performance raised several questions: who, or what, were those ghostly figures which welcomed us on stage? Why does Anne always do all the work? How exactly does Dick get cured? And what did happen to his pants? Why does Scoggins the yokel turn posh? And what is that sinister noise?

Intrigued? This performance had local colour in the setting of Solomon's temple and various other landmarks, and the by now familiar concept of meddling kids being where they shouldn't be. In comparison with their previous outing, however, the plot seemed thin and the audience underwhelmed; laughs were relatively thin on the ground. This was in spite of the very best efforts of Steph Green as tomboy George and her (rather older, one felt) sibling Julian, played with vigour by Nigel Peever. Mike Lockley also impressed as the hostage Mrs Llewelyn, as did the stereotypically evil Eryl Lloyd Parry as her son, but - golly, gosh! - I'm telling you too much!

There were certainly some funny moments - I liked the idea of the 5 longing to be 'almost like ordinary boys and girls', and the bit with the bat - but some rather superfluous dance and fight routines added little to this queer story. All in all it was a bit similar to their last venture in these parts, only not quite as funny. Never mind, the picnic was still jolly enjoyable. But was that sinister noise really Anne's stomach? 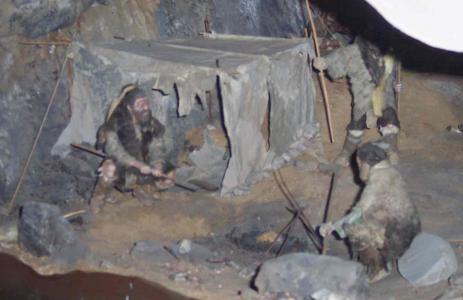 This was a busy, day-long event in the main art gallery. For many visitors the most intriguing aspect of it was the demonstration and workshops led by flintknapper Karl Lee.

Karl explained what flintknapping is - and most of us could be excused for some degree of ignorance on the subject. It is, simply, the business of creating flint tools from pieces of stone, which are worked with a range of other tools. Karl also said that flintknapping, as a skill, had become extinct in Britain - reasonably enough I suppose since none of us have used or relied on flint tools for hundreds of years at least. Flintknapping has been practiced in Britain since the 1970s but Karl is aware of just four working flintknappers in England. He is one, of course, and travelled from the Forest of Dean to lead the day's proceedings.

He explained how the best stone came from quarries in East Anglia, and that he tapped pieces with a small pebble in the hope of the stone making a ringing metallic sound to prove its quality. Dull sounds suggested flaws or cracks in the stone.

In his demonstrations Karl used some natural tools - as our ancestors would have done - and said that red deer antlers made the best job of chipping at stone, giving it shape and a sharp edge. Karl showed how a simple arrowhead flint could be made in 10 minutes or so; hand-sized axe-head flints were crafted in 30 minutes and the shape of the flint meant that it would wear well in chopping trees.

He revealed some interesting ethics in his practice. Having decided what sort of flint he was to make he would normally go on to work the stone to that end - even if the stone might better lend itself to some other tool. Amongst his collection he had hand-held flints for carving animal flesh. Having demonstrated what he could do it was hardly surprising that visitors to the Museum wanted a go and some younger people worked hard and patiently at shaping and sharpening small flints that might separate animal skin from flesh, for example.

Karl was able to connect the work he and workshoppers were doing to the collection of flints found locally and displayed in the Museum and this practical experience will surely give life and meaning to the exhibits. The whole day was further evidence of the imaginative approach of the staff at Buxton Museum and Art Gallery, which was buzzing. It is to be hoped that the Council budgets will guarantee this creative, educational work. 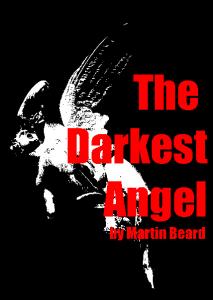 The Young Rec Theatre Company are a local group, now in their 25th year and this is one of a number of productions at this year's Fringe.

The play is set in a fairground/theme park and begins with a group of children, all related, being enticed into an attraction based upon a computer game. From then on things begin to go awry for the unsuspecting children.

I don't want to give the game away too much, but in true mystery tale fashion, there are challenges to overcome, fascinating and dangerous creatures to meet and dislike (for the most part) and some fun to be had along the way.

The play is written for young people, and my 7 year old daughter who accompanied me thought it was "really good". There is a large cast, with many of the actors taking multiple roles. There were a few first night nerves, but this did not spoil our enjoyment at all.

The set design showed some nice touches, as did the script, which included references to some absurdities of the adult world. There was obvious enjoyment on the faces of most of the cast, and as it is a group effort, and all must be congratulated for a good show!

What Became of the Red Shoes? - Little Pixie Productions 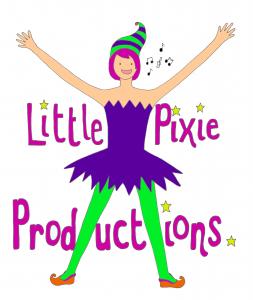 This show is one for the youngsters and their parents. It tells the story of Ruby and her imaginative travels using items found in her Grandmother's attic.

The story is simple enough for the youngest audience to follow the storyline and has a smattering of reminders of their childhood for the adults. It kept my toddler's attention for the most part and there are elements of participation should your attention begin to wane!

Rebecca Little plays both Ruby and Flo, her grandmother, with energy and enthusiasm. The set is imaginatively designed and the sound effects add to the overall feel of the piece.

The show is on over this weekend and if you are looking to entertain your younger children this Fringe, then try this.

Wind in the Willows - Xtension Productions 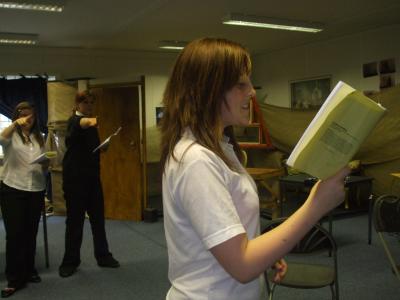 (A new adaptation by Gill Morrell)

This production is staged by the Xtension Youth Theatre Company which comprises 13-18 years olds from the Coventry area. But for 'production' read 'the whole thing' - not just the budding thesps onstage, but the entire tech crew, stage management, fund raising, rehearsal space & production schedule - it's a helluva responsibility, but with shrewd ambition the Company saw fit to pay for a director to oversee things.

It proved money well spent - two or three static actors can easily get lost in the wide open spaces of The Paxton Suite stage, but throughout, the cast of 13 showed good movement, both in relation to the stage and especially to each other. Their delivery was sure and spoken with good clarity, despite the limitations upon projection such a large venue poses. The best moments were the slower spoken ones which allowed for vocal expression (variation) and added emotion to the bare words and created real characters - self expression's what it's all about these days!

Onstage musical accompaniment was provided by cast member Daniel Gascoigne who confidently sung and played guitar - the opening composition didn't seem to suit the mood but subsequent ones did.

From a tech angle, there were the odd expected moments when things didn't flow as smoothly as possible given the problems of mastering an unfamiliar console/venue but overall things went well. I would recommend the introduction of some pre-show music and perhaps some imaginative filling-in between scene changes - the whole mood can be lost in a few moments of uncomfortable, darkened silence.

Whether one evening in Buxton constitutes a National Tour is questionable; what is not is the commitment and effort shown in putting the show together and then hauling it up 100 miles North and giving the audience present that night something which was never less than watchable - a fine effort. 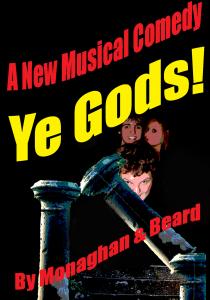 This is the second production by the Young REC troupe I've seen at this years Fringe and I have to say it builds upon the first. It is altogether funnier and the audience seemed to agree.

This is a tale of the gods meddling, like they do, in the affairs of mere mortals. Curiously this production has Roman gods 'living' and working on an around Mount Olympus and Athens, but that aside, there is some fun to be had.

The play is set in recent times. Vulcan is a bit of a one for the ladies and espies a chance to do some mischief. He plots to seduce a young mortal (Helen, maybe of Troy, maybe not) whilst keeping this a secret from his wife. Jupiter is also in on the act simply because he is a bit bored. The unsuspecting mortals fall into a trap, but with the help of other gods they turn the tables on the pair of schemers.

It has all been done before, but that's not the point! This a show played for laughs and the audience really enjoyed it. Jade Simpson as Helen was at ease with both the acting and the singing (it is after all a musical comedy!) and special mention must go to Luke Keeling as Mercury who carried off the role in an effectively camp way, if there is such a thing!

Take the kids, or if they are old enough, send them along, as High School Musical is writ large through this show both in terms of the youngsters taking part, and its potential audience. I think it would do well to be seen in local schools after its run here in the Fringe.