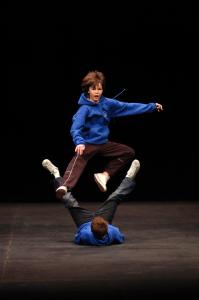 It is great to see Buxton Community School taking such a major role in Fringe30 and this vibrant display of dance will have appealed to many more than just the mums and dads of the performers.

Male dancers can be thin on the ground at the Fringe so it was particularly exciting to see the work of the all-boy Summit Dance Company whose members are aged between 10 and 14 and include children from local primary schools. Talented and dedicated dance teacher Zoe Hanson has developed a refreshing, street-dancing based choreography for her male dancers and they revelled in the macho posturing and urban swagger incorporated into their moves. Much of what they did was also very athletic, even acrobatic (as when a boy ran across the backs of his fellow dancers), and there was room for individuality too as each took turns to break dance or perform leaps across the stage. The dance number Only Boys Allowed? had a welcome streak of humour in it - just who was that taller lad with the cap hiding his face?

The female dance groups Apex and Pinnacle made up of Gifted and Talented students from the school were impressive in a different way. This being their last show of the year, it was pleasantly polished with the confident dancers moving in time and together as they performed their sleek contemporary dance moves. All the dances were lovely to look at but some pieces spoke to me more than others - Closer, inspired by the supposed UFO crash at Roswell, conjured up the mixed feelings we would all have on being confronted by aliens. The dancers looked up with awe but were these creatures to be feared or revered? Their movements conveyed both possibilities.

At the end of a well-supported evening, there was not a dry eye in the house as the smaller boy dancers paid tribute to the tireless Miss Hanson with flowers and a thank you balloon. Let's hope this display encourages more students at the school to take advantage of the impressive dance opportunities at BCS.

Around the town, 18 July

Team dancing in public places is hardly peculiar to England but there does seem something peculiarly English about Morris dancing. It tends to be orderly, problem-solving, almost stately and despite the clashing of sticks and occasional whooping fairly restrained. Whether this casts any light on the perennial debate about "what is it to be English?" I wouldn't know.

I've seen Latvians, Greeks, Romanians and others dance and there are elements of frenzy, spontaneity and passion in their dance. The Latvians I saw ended up dancing in a circle, each on one leg and holding the other leg of their immediate neighbour; the circle hopped around getting faster and faster. This is not the English Morris way.

Not that there is a singular English Morris tradition, as an hour or so on Saturday would have shown. There were dancers in clogs, boots and softer shoes. There dances with sticks, brooms and swords. There were dance teams comprising solely men, solely women and mixed sides. Some wore flat caps, some top hats and others had flower-decorated straw hats.

For students of Morris the named styles included Cotswold, North West and Border Morris. All told 13 dancing sides took part this year - all from the Midlands, South Yorkshire and the North West. I got to see just six sides this year. They started off in windy drizzle but there were confident predictions that "This ancient, traditional English dance will bring on good weather", and sure enough six hours later they were dancing in bright sunshine.

Say what you like about Morris dancing - and you probably will and the dancers have heard it all before - these people are working hard at something they love doing and are giving what they do freely to those happen to see it.

For many people in and around Buxton this will be the only contact they have this year with the Fringe. So all praise and thanks to Chapel Morris and all the other dancers and musicians: Black Dog Molly; Buttercross Belles; Chesterfield Garland Dancers; Chip off the Old; Dukes Dandy; Harthill Morris; Manchester Morris Men; Pecsaetan; Powderkegs; Poynton Jemmers; Rattlejag Norris; White Rose Morris.

You can see Chapel-en-le-Frith Morris Men outside the Old Clubhouse at 8 pm on 20th July.

Lost and Found - Made by Katie Green 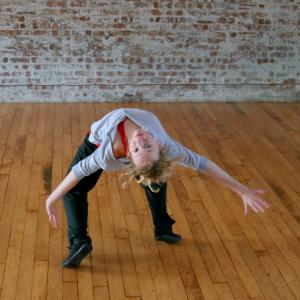 Award-winning choreographer Katie Green brings an intense, moving piece of contemporary dance to the Fringe telling the story of a young woman in a destructive but compelling relationship and how she finds support and liberation through her friends.

Daniela B. Larsen is the protagonist and is hardly ever off the stage - quite a physical feat apart from anything else. We see her first in her red dress involved in a volatile partnership with a man in jeans and blue shirt (Graham Adey). They fight, they make up. He falls on her, she carries him. At times there is a feeling that she wants to escape but repeatedly he catches her by the shoulders and she is forced into a backward roll between his legs.

The music is as discordant and full of static as the relationship but the pace of it quickens in the second section in which he leaves and she breaks free (pushing her way forward in almost a breaststroke motion). She finds solace in her friends, a woman in blue (Marie Chabert) and a man in red (Morgan Cloud). By now we are fully involved in this physical storytelling and it becomes suddenly apparent how dance can be more direct and expressive than language. They literally support her. Standing on top of each she literally gains a new perspective. Tom Williams's music becomes faintly Chinese with a harmonious xylophone sound. It is unexpectedly tear-jerking when our heroine smiles for the first time.

But the relationship is hard to break. Man in blue is back but she gathers her past experiences to her breast and keeps her distance before finding new ways to relate to him. Crucially her friends are still on stage. Does man in blue find a threat in man in red - a colour match to his girlfriend? In an electrifying scene the two men dance together, nose to nose at one point in a terrifying stand off.

See it yourself to witness the ending to this riveting work. Lost and Found deserves a bigger audience. I have focused on the narrative, but the dancing itself is technically superb and exhilarating to watch. Time and again the balance between performers changes and they never get it wrong. At times there is a feeling of genuine danger. Man in blue slaps the shoulders of his girlfriend with a smack that resonates in the intimate drama studio. Both tense and tender, this is a stunning work from choreographer Katie Green. 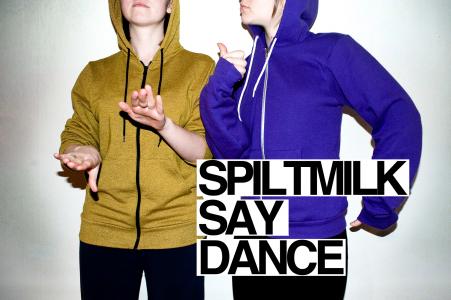 Last year, Spiltmilk Dance wowed Buxton audiences with their show 5 Dances, making their return to the Fringe the equivalent of 'the difficult second album' - would the expectation engendered by their success be lived up to?

The answer is a resounding, enthusiastic YES!

Imagine if some future human stumbles across film of the social dance crazes of the 20th Century - the hand jive, the twist, disco, rave, even novelty dances to songs such as YMCA, Agadoo and The Birdy Song. Imagine that there is no sound on the film, so they had no idea what music went with the dances. And imagine them deconstructing the dances and then reverse-engineering them, building them up from their constituent parts, but ending up with something that is entirely new.

That's something like what you get here - but if that makes it sounds cold and technical it's not. There's a joy and excitement to the whole show that communicates the wonderful expression of dance so much that I for one felt I'd almost like to join in. These social dances were, of course, all ones that non-dancers could embrace, Not that just anyone could do what Spiltmilk have done here. Founders Adele and Sarah, along with co-dancer Jenna, convey an infectious delight in what they do as well as a technical mastery that is simply amazing, especially in the close-up environment of the Paupers Pit.

The first performance was totally sold out. Book your ticket now so you don't miss this wonderful show.