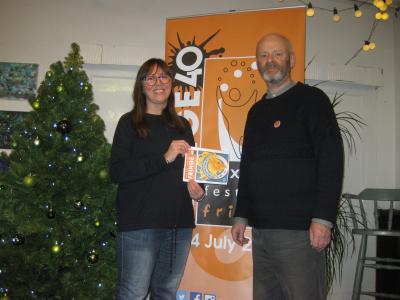 Buxton Festival Fringe has announced the winner of its recent competition to design the cover of next year’s printed Fringe programme.

Catherine Webb, a part-time teaching assistant at Buxton's St Anne’s Catholic Primary School and formerly a graphic designer at The University of Manchester, says she was “thrilled and tickled pink and everything in between” to be awarded the £100 prize for her winning artwork, an eye-catching design entitled Roar Talent, celebrating 40 years of the Fringe.

Catherine says: “The overall look I have gone for is Art Nouveau which I feel is reflected in the design and architecture within Buxton. The lion is a representation of the lion's head at St Anne's Well, but also has symbolic meanings - strength, pride, courage. The Buxton Spa waters are depicted in the circle around the lion. In the mosaic background I have placed icons representing themes included within the Fringe.”

She learnt about the competition through her friend Mandy Tootill, an award-nominated performer at 2018’s Buxton Fringe. Catherine adds: “As my daughter Milly is now at secondary school I have finally been able to find time to reconnect with my interest in art and design and this competition has been my first step”.

Catherine’s stunning design will also feature on the Fringe’s flyer to be distributed early next year and possibly on other publicity materials. Two joint runners up were also announced, local artist Pam Smart and Ali Quas-Cohen. All the entries to the competition are due to be published on the Fringe website.

Keith Savage, Chair of the Buxton Festival Fringe states: “Catherine’s design and image caught our imagination immediately. It is vivid, vibrant and confident. It sets the standard for all that we hope to achieve in Fringe40.”